The difference between agate, jasper, chalcedony and chert is one of the biggest stumbling blocks for people getting into the hobby of rockhounding or mineral collecting.

I know because I was tripping over it for months, and I’ve seen other people struggle with it as well. The truth is, even the best rock identifiers can’t always be sure. That’s the thing about rocks – they’re a bunch of stuff mixed together. The same rock could have agate banding with a jasper body and druzy quartz cavities.

Let’s start with the generic ones.

Chalcedony is a broad term that covers both agates and jaspers. It is often associated with blue and it usually means microcrystalline quartz of a high gem-like quality. People usually use the agate and jasper terminology over chalcedony but it is sometimes used to describe mono-coloured gem-quality material.

Chert is also a variety of chalcedony. It is used often to describe unnamed bland jasper.

– Both are the same hardness level of MOHS 7

– Both break with conchoidal fracture with a non-granular texture and vitreous or waxy lustre.

Here’s an agate: the banding gives it away.

As mentioned above, agates and jaspers are both under the umbrella of chalcedony, but they are used more specifically along with trade and location names to identify specimens (Mossy Agate is a trade named based on how it looks; Dallasite is named after the road it was found on).

Different opinions on what exactly makes an agate or a jasper abound on the internet, but there are some loose rules to go by:

Agates are usually translucent to transparent when cut in a thin slice, while jasper is usually opaque.

Agates often have distinct banding formations (sometimes looking like “fortifications”) or mossy, dendritic and plume inclusions, while jaspers are more likely to be brecciated (sharp chunks of rock in a matrix) or display a picture or some other type of design. 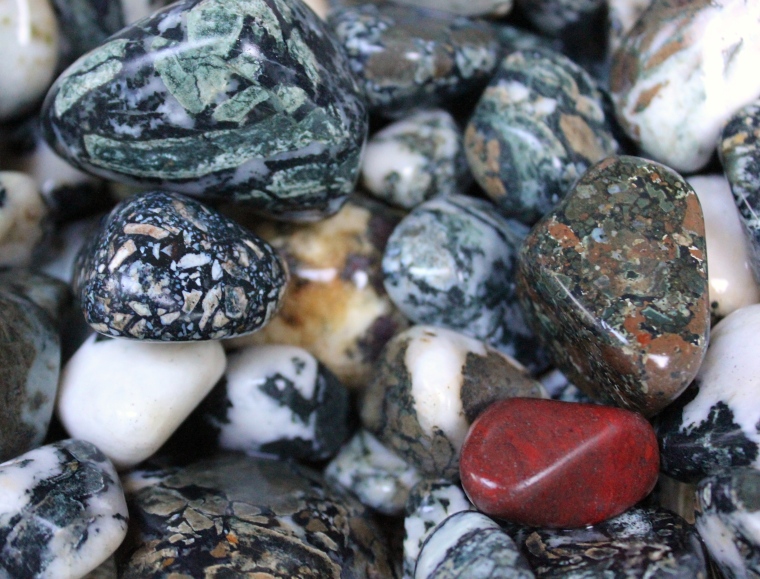 Here’s a pile of jasper, mostly Dallasite and some red, from Vancouver Island. Sharp patterns, but not the same banding.

The primary things to look for when rockhounding for an agate is for it to be translucent, microcrystalline and have bands, orbs or other inclusions.

Jaspers will often be brecciated and opaque, microcrystalline and usually with interesting designs.

If you can see crystals or easily scratch it, it’s not an agate or jasper.

← Setting the tumblers, need more!
Beach rockhound with a deer →

7 comments for “Agate, Jasper, Chalcedony, Chert – How to tell the difference”